Christmas Elf Tradition is Fun for Kids and Parents, Too! 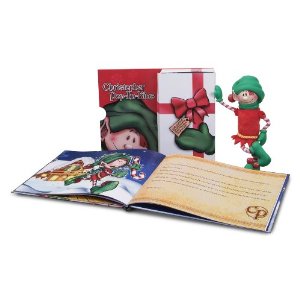 Why, he has help from his elves, of course! The Christmas elf tradition is Santa’s way of keeping track of children all over the world. Each year, Santa sends them out on missions to observe little boys and girls and then report back to him at the North Pole. By day, the elves appear to be normal stuffed toys. But by night, while children are asleep, they magically move around. In the morning, they are never in the same spot where they were the previous night.

It’s easy to invite one of Santa’s helpers into your house to start your own Christmas elf tradition and make sure Santa is getting all the information he needs to be sure your kids are on the Nice List. First, you need to select your elf. Any elf will do, but there are a few popular ones that come with stories to explain their mission for Santa.

Christopher Pop-In-Kins may have been the first of Santa’s elves to start visiting children every year. He was an elf who longed to be around real children, and Santa granted his wish by making him the first “Children’s Elf.” Each year, Christopher appears at a child’s house after Thanksgiving and then returns to the North Pole on Christmas. But in the meantime, children will have a hard time keeping track of him as he “pops” to a new location every night. The elf and his book, “Christopher Pop-In Kins,” first appeared in 1985, but he was redesigned and the book was re-illustrated in 2008, perhaps due to the popularity of another Christmas elf.

The Elf on the Shelf: A Christmas Tradition was published in 2005 and became a holiday bestseller. Based on a similar tradition as Christopher Pop-in Kins, the Elf on the Shelf pretends to be a stuffed toy during the day, and magically returns to the North Pole each night to report back to Santa.

But unlike Christopher, these elves don’t have names until the children they’ve come to live with give them a special name and register it in the Hall of Registry. Then the children can get an official elf adoption certificate. The Elf on the Shelf comes in both fair-skinned and darker-skinned versions, as well as blue- and brown-eyed variations. The doll that comes with the boxed gift set is a smaller, cheaper version of the Elf on the Shelf compared to the larger plush (and cuter!) elves you can buy separately.