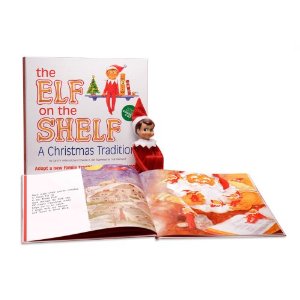 How does Santa Claus really know who’s been naughty or nice? “After much urging by the elves and Mrs. Claus, Santa has allowed his biggest secret to be revealed in The Elf on the Shelf: A Christmas Tradition. Touted as ‘The best thing since The Night Before Christmas,’ this gift set includes a blue-eyed North Pole pixie-elf, hardbound children’s book and keepsake box.”

The Christmas shelf elf has become quite popular since Carol V. Aebersold and Chanda Bell released the Elf on the Shelf storybook and accompanying elf. The premise is simple – Santa’s elf has come to watch your kids to see if they’re being good. By day, they’re mild-mannered stuffed toys, sitting on the shelf. But at night they return to the North Pole to report to Santa. Children know the elves have reported to Santa and then returned because in the morning the elves are never in the same spot where they were the night before.

The product is popular with both kids and adults. In some of the Amazon reviews, one person wrote, “After hearing from friends and reading reviews how great this was, we bit the bullet and got it. I cannot say enough about how cute this was for our two boys (age 6 and 3). They bolted downstairs every morning to find the elf, and the oldest cried when he touched it accidentally because he thought it would lose its magic. The story and elf was the sweetest thing. Note, however, that parents have to remember to move the elf around every night, or come up with creative excuses for why the elf decided to come back from the North Pole into the same spot! :-). ”